SHEFFIELD UNITED’S win over West Ham was overshadowed by another VAR storm as Robert Snodgrass’ dramatic injury-time equaliser was ruled out.

Declan Rice won the ball in the Blades half to allow his Scottish team-mate to make it 1-1 in the dying seconds.

Robert Snodgrass thought he had salvaged a point for #WHUFC, but his joy was short lived as VAR ruled it out for handball!

Was it the correct decision?

But the video referee decided to award the hosts a free-kick instead after ruling Rice had handled the ball for a controversial finish.

The England international, 20, spoke to Sky Sports after the game and laid into VAR – roaring “football shouldn’t be like that”.

He said: “We are fuming. All the lads are livid. This is a tough place to come, credit to them they ground it out. We created some chances and missed some chances. The goal at the end was a tough one to take because a point on the road would have been good for us.

“I’ve just watched it back. He has knocked the ball into my hand. If you are running with your arms like that with the rules as they are now it is handball but it is not intentional. It is a kick in the teeth.

“I think it is the thoughts of every Premier League player, not just me – pretty much every one doesn’t want to have VAR in the game. There have been so many decisions this season that have been absolutely crazy.

“They were celebrating VAR like it was a goal and football should not be like that. We are not too happy but it is in the game now and we have to get on with it.

“I can’t get over it, he knocked it into my hand. It is not intentional handball. I was buzzing. I ran 20 metres up the pitch, slipped the ball in for Snods.”

“Well, we’re fuming really. All the lads in there are livid!”

Declan Rice was NOT happy after VAR ruled out Robert Snodgrass’ injury time goal for a handball against him in the build-up.

Hammers boss David Moyes insisted that his side scored a “good goal” after missing out on a valuable point.

He told BBC Sport: “We scored a good goal to equalise. I thought Declan had done brilliantly to break through the middle. He played a good pass and we scored.
“I thought it was a really good goal.”

Most read in football


Man Utd rule out Eriksen move in January, so they can get him for FREE in summer

Former West Ham stopper Rob green told the BBC: “Wow, wow, wow! It’s incredible. Talk of VAR taking the emotion out of the game – that was the most celebrated moment of the game!”

Ex-Aston Villa midfielder Lee Hendrie reckons the officials got the call right but agreed with Green that the technology needs to be used carefully.

He added: “Unless VAR gets these decisions correct – which in this case I think it has – you can just see the emotion and excitement being taken from the game and all it’s doing is making people furious.” 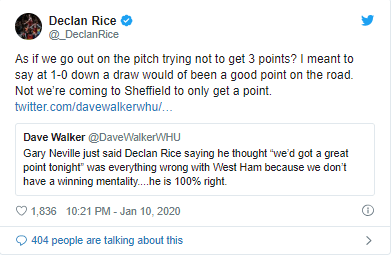 Got to be a goal VAR joke again

VAR crushing David Moyes in the matter of seconds…

You lot are right, it IS the handball rule and not VAR. But VAR are just as bad.
I’ve moaned week in, week out about the two – and I’ll admit that it’s more painful now it’s against my club – however, a combination of the two are killing our game. Awful.

Imagine paying thousands of pounds each year to follow your football club and not even being excited about scoring a goal because your first thought is the fear of VAR disallowing the goal for some ridiculous reason. It’s not football anymore.